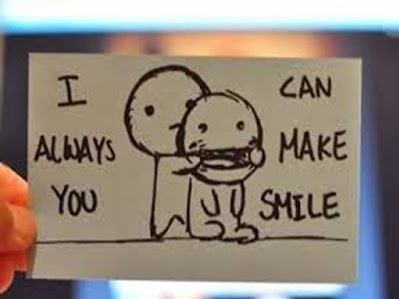 A Quirky Friend, an unusual one is a friend who can take the risk to make your laugh even in the midst of an acute pain your going through…..

If you have friends who are as weird as you, then you have everything.
-Unknown

That day it was really horrible. It had started mildly two days before. Gradually growing significantly the next day, and then escalating to an unbearable state. I had taken a pain killer. But it was simply intolerable that day. Even painkillers were not working. Perhaps something was really serious. I had taken the doctor’s appointment for the evening.
Let me tell you…those who tell that the most acute pain is the pain happens due to heartbreak, must not have experienced a toothache….especially a root canal one….I swear.
It’s not that I’m having a toothache for the first time. But it was never so serious. It used to cave in after taking some pills or some homemade remedies.
I was trying to deal with pain by laying on the bed when my phone rang. The name that flashed was “PehchanKounShakti”
Let me confess one of my typical habits related to how I save phone numbers. For some numbers I keep giving it a tag depending upon the behaviors, reference, allusion or something like that. For ex, I have a relative whom I know has a habit of gossiping in your back. He would talk nicely with you but in your back he would say something against you to somebody else in the family. There were so many misunderstanding because of him as well. . So I have given a tag to him as “Lagajota Reporter”. (Lagajota is an Odia word that means “bitching”). Some other relative’s number also saved as MentalKejriwal – Who talks mindlessly, WhoisThis – Doesn’t deserve to be a relative, PaneerMasala…etc.
In similar way I have also a habit of giving tags to my friends and save their number that way. So I have Friends called GoogleNiru, WikipediaRachna, MrsFunnyboneBhabi TamatoChutneySuman etc. Some are badly named as well like (PhootaniA, KhadoosBaba, AngryBird, FerrarikaPuncture…etc and I have added few after watching Chhichore movie which I can’t state here and many more…
One of them is “PehchanKounShakti”…
Shakti is really a wonderful friend. We had met for the first time in the initial days of our working life. Since then we are friends. He is actually very witty, spontaneously jocular and would always cheer you up saying something in a very amusing way. Yeah…I had a thought of changing his tag as “KapilSharmaShakti” once because he is bit like that though never crosses lines with friends.
However the reason behind giving him the tag “Pehchan Koun”….. because he used to be bit like Navin Pravakar – The Comedian – of the first season of Comedy Reality Show The Great Indian Comedy Show.
I picked up the phone…
After the initial exchange of hi/hello…he enquired about why wasn’t I active in the group chat on WhatsApp since two days. Like everyone we have a group. However hardly I find time to interact with friends and do that friendly banter. But as a habit I just share a good morning message in the group mostly apart from those occasional wishes for Bdays, anniversaries, and festivals. But since few days I hadn’t even shared anything.
But friends know you best and with slightest change in behavior they start feeling it. No surprise, that all must have felt my absence. That’s why got the phone call ….
Well,
I told him about my problem. He quickly gauged it from my voice.
It could be a root canal … I guess. He said with concern.
Hmm…even I feel so. I said
Well u need to take care of your teeth….dear. Use some ayurvedic or medicated tooth paste to prevent your teeth from decay. He said seriously after realizing that I was really in awful pain.
Hmm…right. Let’s see what the Dentist will prescribe…I said with painful voice.
“Hey…I know an ayurvedic guy who recommends very good toothpaste for all-round care of your teeth and gums.” He said caringly. “Why don’t you visit him after your appointment with your Dentist? I’m sure there will be no further problem in future.”
“Is it…? Are you sure? I asked anxiously. Give his details then…I will try to visit.” Though not a mood, having that acute pain, to have such conversations but I had to as I couldn’t ignore him.
“Of Course I’m sure. It’s very scientific.” He said in a convincingly.
“Ohh!! What’s scientific about it? I mean is it something purely medicated?” I asked passively.
“Not Like that! Well…once you start using it na….within a month…I guess…all your teeth would become Mr.India. When there will be no teeth…then how will there be pain?
Na Rahega bansh…Na bajegi Bansuri…ha ha ha”
I cried …”Whatttttt?”
“he, he, he….” From other side.
God! This guy is incorrigible. Initially I had turned red with pain and anger, was really annoyed like anything and felt like punching him in the phone itself. Had he been in front of me that moment, I would have made sure to make him Mr.India…I swear.
That was surely not a time for joke.
“Relax, Ms. Toothache, I know you are looking for something to throw at me. I just wanted to cheer you up, Take care and let me know what the dentist tells after your visit…Ok.” He said caringly.
“Bachgaya tu, varna aaj tujhe Mr.India bananne se mujhe koi nhi rok shakta tha…Tul mil next time…” I was really mad that time.
“Haan, Dekhlenge, phir haal tuu aapna daant ke dard ko Mr.india karne mein focus kar,,,” He said mischievously.
“Chup raho….” And I disconnected the call.
What a disgusting guy…I thought, red in anger and pain and banged the phone on the bed.
In the evening, I visited the doctor and it was confirmed, it’s root canal. Accordingly treatment was done.
However, when it was over, I felt very amused by that act of Shakti. I couldn’t stop laughing as well because…it could only be an odd Friend like Shakti who can take the risk to cheer you up when you’re in acute pain. Isn’t it?
He is definitely a Quirky Friend….a happy type though.

You know what… Friends are real therapist!!!

One of the best thing about my life is I have really been blessed with very good friends. They are like my soul family. Thank you all my friends…you are all treasures of my life.
Hey Shakti…Thank you yaar!! I would have dumped you in Municipality dump yard that day but you know what…har eek friend jaroori hota hai…majboori hai yaar…he he he… 🙂 Shakti indeed you are a A Quirky Friend…

It is the privilege of friendship to talk nonsense, and have her nonsense respected. Said by Charles Lamb.