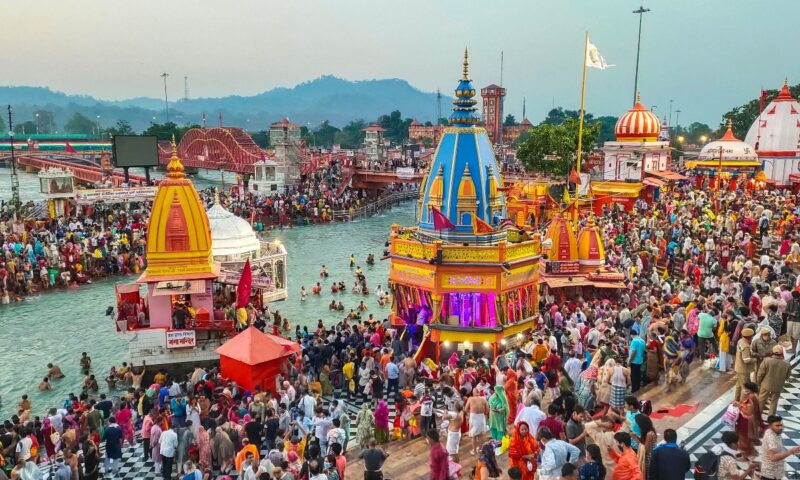 You are not a drop in the ocean.

You are the entire ocean, in a drop ~ Rumi

Kumbh Mela – The very mention of “Kumbha” more clearly “KumbhaMela” had always been creepy and scary for me in my babyhood days. You know…in those stories of My Granny there was always a missing girl in Kumbh Mela. She was distanced from her parents as she left their hand in the crowd. And faced the hell of the world. Nobody was there to take care of her. Also, she was not able to find her parents after leaving their hands in the “Kumbha Mela”.

And finally, one fine day by God’s grace her parents could find her out after much efforts, searching for her. She was back to her home in a very bad state, hungry, untidy & messy. She learnt a lesson that she would never leave the hands of her parents again in any other gathering.  The moral of the story was, never go away from your parents while in a crowd or congregation.

May be the whole idea of My granny was to teach me how to remain with parents and never go anywhere without them. Sometime may be inculcating the Faith on the God almighty in me but I was also developing fear towards the “Kumbha Mela”. I used to quickly identify myself with the missing girl. And the very thought of it and the “Kumbha Mela” would be enough to give me “Goosebumps”.  It appeared to me as a place where little girls may part away from their parents.

Well, the horror remained till my teenage only. After that it washed away. First it became a laughing stock for me following the bollywood dialogues “Kumbh ke Mele Main Bichade Hue Do Bhai” (the two brothers who were separated in Kumbh Mela).

Also, after that the fear and apprehensions got converted into intense dislike following the horrifying nasty look (I’m sorry but honestly, I used to feel like that) of Aghori babas and Naga Sadhus pictures in any article or print material available on “Kumbha Mela”.

I used to wander, to be religious why one needs to look so much ghastly horrible! Is it really necessary to look horrible? So, in my entire college days I was never interested in learning about “Kumbha Mela” and its significance.

It was only in 2010 when the Maha Kumbha Mela was held in Haridwar I got some positive inclination towards it. Precisely because of a Divine Encounter.

That year My In-Laws – Mother-in-law and Father-In-law – visited the same, for a holy bath at Ganga and have a divine experience. Let’s not forget that “ATTENDING KUMBHA ONCE IN A LIFE TIME” is considered to be very auspicious, divine, religious & pious.

That time we were staying at Delhi When Baba & mamma decided to visit the Kumbha Mela, they insisted us to join them also. But my son was not keeping well those day. He had adenoids. So, we were supposed to keep him away from anything COLD. They came from Odisha, visited the same at Haridwar while completely in touch with us through phone.

It was almost the end of the Maha Kumbha Mela. My in laws were supposed to pack & return in two days. However, in the last day of it their phone became unreachable. At the same time, we learnt that a stampede had happened, from the news. We were horrified. We called up the hotel they had stayed. But they said that, my in laws had checked out from there. Then series of frantically calls, desperate attempts ask some people who lived there to find out the whereabouts of both, had already drained us.   Much efforts in vain, we thought might be something wrong have happened with them too. God Forbid!!!

Without losing a moment we headed for Haridwar. I remember we just picked our son directly from the school. And in the car only I changed his clothes. A friend of my husband Santosh had accompanied us in the journey who hail from the Haridwar. His father had already done the search attempt.

On reaching there we enquired about them in the Hotels, akhadas, dharmasalas at every place where there was a chance or a possibility where they could be. But left with no clue about them. Kumbha Mela was almost over by that time. So, there was no such dense crowd also. It was almost night. So, we thought next morning we again go for searching. In the meantime, Uncle – The father of the friend of my hubby – had spoken to the police in charge as well.

Next morning, we visited the riverside of the Ganga. It was crowded but not so densely. People were still doing holy dip there. But we had a different objective. We parked our car in the prescribed area, and started searching the entire expanse by walking. Visited every nearby hotel, dharmasalas again along with the Photos of our parents. The first hotel where they had stayed recognised the photo & gave us the Adhaar Card of Baba which he had by mistake probably missed it there. The manager also informed that they had lost their phone too.

There were many Sadhus there who were insisting us to take the dip, visit the temple and all. But we had our different objective. In fact, I don’t know when but I had already taken a vow that if something (You understand it) had happened with Baba & Mamma, I would never take a dip in Ganga throughout my life.\

Around Almost 12.30 pm. We decided to return to Hotel as the scorching sun had already made it harsh on my son. It wasn’t possible to walk any more as he was feeling restless by that time. We had thought we would again visit the place in the afternoon, search for them and then would speak to the police as well.

We got into the car, my husband just put the reverse gear to get out of the parking & turn the wheel, when a Sadhu – A Tall Fair & Fair Man – having a broad smile on his face appeared before us. He knocked the window on my side with a gesture insisting us to open it. He didn’t seem to be asking for any alms unlike other couple of Sadhus.  I slide down the glass, with a question mark writ on my face. He asked with very loving yet clear voice, “Did You Take the Dip in the holy Ganga? Ganga mein dubki lagaya kya”

I said, “No, we have come here for a different reason.” Half dejected, half tired & done.

I was in no mood to listen to such things that time. I was almost acquainted by such antics of Couple of Sadhus there by then. However, I didn’t want to be rude either. So, controlling my emotion I opened my wallet to give some money – That’s what we do often …right – he stopped me immediately.

He said in a firm voice, “Kal tu yahan dubki bhi lagaye gi, Mandir bhji jayegi, Diya bhi lagayegi. Maa aise nahin jane degi tujhe” & then he helped us to get out of the crowd. He headed to our hotel.

We had our lunch silently, deeply anxious & apprehensive.  However, we were exhausted too. So, we slept. Around 4 pm my husband woke me up. And said “You Know Baba & Bou, both are at Puri. They are at the same Dharmasala at Puri where their Guru stays.”

Relaxed, Relieved and thrilled!!! We offered our Gratitude to God, immediately.

Later we learnt, actually both the parents had already left for the railway station before the stampede occurred. They had no reservation, so the took the tatkal tickets to Puri & Boarded the train. Since they were not that familiar with mobile phones & didn’t remember the phone remember the phone numbers, they couldn’t inform anyone in the family. After reaching there, the manager of that Math where they stayed had the phone number of my brother-in- law. That’s how they informed about them & their wellbeing.

We immediately dialed the number and spoke to Baba.  In our culture, it is believed that, after bathing in Ganga (Ganga Snana), one should first Visit Lord Jagannath then only can go to home. Else it would not be considered a punya. In fact, after every Dip in Ganga on return one needs to visit The Lord Jagannath Temple before returning to home.  That is the religious process which we were not aware. As they lost the mobile, so they couldn’t inform us about their program of leaving Haridwar. Anyway, Thank God!!They were all fine.

In the evening we visited the Riverside of The Ganga & Attended Ganga Arti. We were entirely lost in the Divinity Around.

At night, had a peaceful sleep. Next day morning, went again, had holy dip in the river Ganga as per the rituals. The entire firs half went by visiting temples, offering our gratitude. In the afternoon we had a small drive in and around the place of Haridwar. At the evening again the Ganga Aarti. I was looking for the same Sadhu who had told me regarding my holy dip in Ganga but in vain.

Next day, we were on the roads towards Delhi.

That was my first visit to Haridwar and my first dip in sacred River Ganga though not witnessing or attending the “Kumbha Mela”. But the residue of preparation was testimony of the immense divinity of “Kumbha Mela”. I realised that there is indeed some mysticism about this sacred religious festival. Else how come since eternity it is happening! “Maha Kumbh” or “Kumbh Mela” is considered as the largest congregation of humans in the world & that to for a month.

There must be certain kind of divinity ruling it over.  I was filled with gratitude for God for making me visit it this way. As I looked through the car window, I saw the smiling face of the Saint who had blessed me near the River Ganga. Was he really a human or….????

A Part of it also Published…CLICK HERE