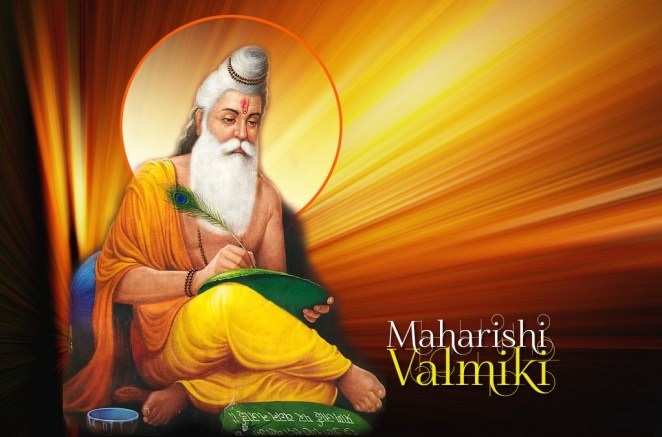 Valmiki The Sage – The Brahmashri – is the author of the Maha kavya The Ramayana which is also know as the Adi Kavya – The First Poem. It’s the Life Story of Lord Ram in Treta Yug!! He is a very prominent character from our Mythology

The story of The Sage Valmiki has always been very fascinating for me. Because I could really imagine the picture in my mind. It’s one story that is still afresh as it is what I had heard first time. Another reason why this story always motivates me is we can change our destiny if we can change or transform ourselves. The Sage Valmiki was the transformed form of The Dacoit Ratnakar.

THE STORY OF THE SAGE VALMIKI!!!

Valmiki, in Sanskrit language it means anthill. It was not the birth name of the sage. His name was Ratnakar born to a rishi Prachetasa.

When he was young, he was lost in the jungle. A hunter found him and took him to his home. His new parents were quite loving, so he forgot his originality. Under his foster father’s guidance & care, he became an excellent hunter. Eventually he was married and had children. However, as his family grew larger, he felt that only hunting wasn’t enough to feed the family. So, he resorted to robbery and looted people in the village around.

One day The Mahamuni Narada was passing through the Jungle. Dashyu (Read Dacoit) Ratnakar attacked him for some valuables. Sage Narada instantly played his Veena & sang verses praising Lord Ram to calm down the anger of Ratnakar. It really worked. Ratnakar became very cool as he heard the music & verses, It had worked instantly.

Then the Sage asked him, “Why are you doing this?”

“For my family!” Ratnakar replied.

“Do you think the members of your family will also share the sin you are committing by this way of earning. You are attacking & looting people with your might.” Narada asked.

“Of Course, they will.” Ratnakar replied with confidence.

“Do one thing, you tie me here against a tree. Go and ask each of your family members. If they say yes, you come, I will be here only, waiting for your return. “

Dacoit Ratnakar thought it’s not a bad idea. He himself was curious also.  He did the same and went away to ask his family.

After couple of hours, he returned with shrunken face. It was evident that his family had refused to share the sins he was committing.

He untied The Sage Narada and asked him for the guidance to wash away of the evils he has already done.

Narada muni taught him the name “Rama” & asked him to mediatate on it. Since he was neck – dipped in sin, he couldn’t even chant RAMA. So Narada asked him to chant MARA continuously and left telling him do meditate by chanting till he returns.

Ratnakar did follow the instructions, sat and mediated for years. Eventually his body got completely covered with anthill. After some years, Mahamuni Narada came back, removed all the anthills, & said that his Tapashya Paid off. He is a transformed person now. He was bestowed with the title BRAHMASHRI and renamed VALMIKI – as he was reborn from the ant-hill.

After that we know how did he envision Lord Rama’s Life and wrote the Maha Kavya Ramayana. He also authored some other scriptures like Yoga Vashishtha – The Philosophy of life

The moral of this story is no matter where life puts us, no matter what we have done so far, there is always scopes for New Beginning and a Self-Transformation.

We are accountable what we do in terms of actions or thoughts. Also, we are the one who can change ourselves. There is a Valmiki within every one of us.  There is a Sage in Us. We need to awaken it. Because there lies the PURPOSE OF OUR LIFE….the very reason why we have been given Human birth. So, let’s enlighten us from within!!!!