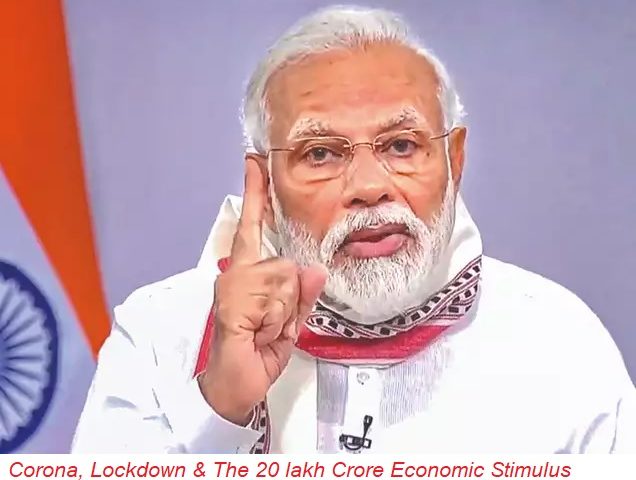 In his recent address to Nation Prime Minister Modi announced “The mega Rs 20 lakh crore ECONOMIC STIMULUS PACKAGE” to deal with the economic loss caused by Corona Virus Pandemic. I think many people just didn’t understand what exactly it is and how is it going to REVIVE the collapsed economy of the nation. Frankly saying even, I don’t understand the economic things in general and this is in particular.  We all know, the world has been crippled and the economies of the nations across the globe have suffered a great downfall, at present. India is no different!! So amidst this financial crisis how the 20 Lakh Crore STIMULUS Economic Package announced by Honorable PM of India, which is around 10% of our GDP, would come to rescue is an important thing to understand.

Here is Mr.Biranchi Narayan Acharya, @one of the finest and seasoned Political Analyst and Observer, and a  fortunately my brother, explains it in easy words. Let’s understand what exactly it is and how is going to help the business and economy of the nation….

I am not an economist, but then my long experience in current affairs and political observing taught me many things. Thus, I want to clarify some doubts asked to me on the 20 lac crore rupees package/stimulus announced by central government. Let’s see some reactions.

Chidambaram said the package is a jumla and nothing else. Some criticized it as a serial (As Union Finance Minister declares measures phase wise). Dr Udit raj, an ex-BJP member who joined Congress because BJP denied ticket to him in 2019 for non-performance as MP earlier demanded minimum 10% of GDP as package but now ask where from the money will come. He further cited Manmohan Singh’s most infamous dialogue if money grows in tree.

To add more confusion many Congress member asked whether this 20 lac crore will be spent from budgetary provisions or central government will borrow this amount? Finally Rahul Gandhi said that the money should be transferred to migrants directly.

Now, I don’t know or understood whether they know about an economic package or stimulus or that they just confuse people knowing very well what the “Stimulus” is.
I know my readers prefer a simple explanation of any complicated matter. Thus let me give an example of financial stimulus. This will clear “What a Financial Stimulus precisely means?”
Let’s assume a hypothetical scenario. You gave some loan to your friend for a shop. Due to some problems, his shop gutted in a fire accident. He needs to be provided a stimulus so that he can be able to revive his business.

How should be your stimulus? Will you waive out your loans? If yes, then you relieved him off any loan, but then there won’t be any revival of his business.
The true stimulus is that you restructured his loan repayment extending it for a longer period and also you re-finance him at a lower interest in a longer term so that he can return all your money in an extended period while reviving his business. You can also ask him not to return part loan for a specific period (for example until his shop started to function).
You can also make some rule or amend some condition of the loan for his revival.

The bottom line is very simple. If you don’t give such a stimulus then your friend is finished at the same time your money given to him as loan also gone. Thus, a stimulus is always a win-win situation. Your friend is revived, and your money also saved.

All these things have got a monetary value. The interest you forego, the amount you refinance, the total saving of interest of your friend and most importantly your friend’s reduction of loss due to your quick refinancing, all these are computed in a monetary term.

Neither your capital is lost, nor your friend suffered more loss and the loss of the business entirely. Means, he doesn’t have to close his business, instead work on it…i.e. REVIVE!!

Same thing applies to government and the people including business folks. In such a financial situation, government provides some measures such as low rate financing, change of laws and many other things ( you can go through the declaration of Union Finance Minister, if you really understand this post ) which has a monetary value of 20 lakh crore. Package doesn’t mean distributing money. Therefore, don’t be confused and understand what an economic package or stimulus is…

I am not an economist, but then my long experience in current affairs and political observing taught me many things….

Posted by Biranchi Narayan Acharya on Saturday, May 16, 2020

So, basically there is a fundamental difference between “FINANCIAL RELIEF PACKAGE” and “A FINANCIAL STIMULUS PACKAGE.” A Relief Package helps to survive immediately whereas the Stimulus Package helps not only to Survive but to Stand Again and back on the track.

20 Lakh Crore package is a STIMULUS one. As I said earlier, I did not understand what and how exactly it is going to REVIVE the Economy. But now it is clear to me.

Well my most concern was for MIGRANT LABORERS Community who have been the worst victims of this pandemic. They are acutely depressed at present. I was apprehensive, thinking in what way it’s going to Help them.

Well….since MSMEs going to be given a stimulus package, the factories and industries will start again. They are the most absorber of the Migrant Workers.  So, they are going to get the work, at list soon. For them job loss will not be an issue.  And I hope the relief package that are announced earlier will be distributed with more transparency. Which in return should help the migrant survive the current time.

The only thing I wish…with this Corona Pandemic, at least The Migrant Laborer Sector should be made More Organized as they are our Core Workforce. It’s heartening and acutely depressing to see these people suffer…for no fault of theirs. 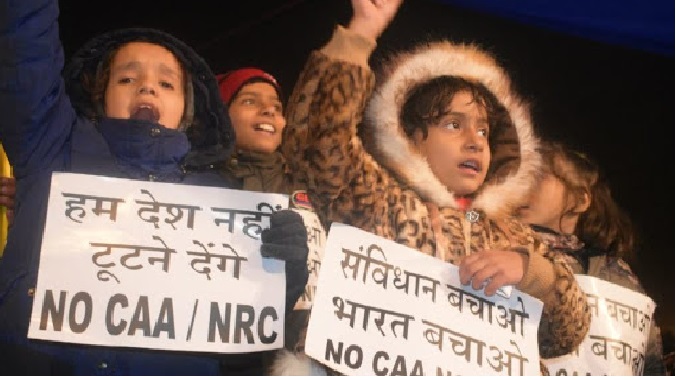 Should Children be Part Of Any Political Protest?

Thank God!! The Delhi assembly elections are over. I must admit, painfully tough that electioneering in India has become synonymous to bitterly cacophonous, and with time it has become vitriolic bluster plumbing new depths every time. It’s almost a ritual now, but I think we have also developed imperiousness to these sullenly cynical high decibels as well.

And this time it was well expected in Delhi given to the fact that CAA, NPR and NRC protests were going to be blended in the election campaigns.

However my objective isn’t about the electioneering in India, rather I am more concern about one particular thing. During this process unfortunately children have been used as a part of these protests/campaigns which I feel is something we should seriously think about. Here are some of my personal encounters on various social media.

Few days back I saw someone shared a picture on Twitter where a toddler was seeing in a Namaste pose and the text written on the picture was “Hindu.. Jag Jao”. I immediately replied him that,  that’s unfair and children shouldn’t be made part of such things. He argued that nothing is going to affect that child and that’s nothing playing with the childhood. I said, “.It’s not about the child but about how do we respect and protect childhood.” He apologized immediately and told me that he would take care of it in future.
After few days my attentions were caught by a similar kind of post against Modiji shared by a journalist, columnist and a veteran author whose columns I never miss a read. I instantly pointed out but as expected why would a celebrity author care for it!!

And then it seemed things have gone much more ahead. At Shaheen Bagh I saw the clips of children the sloganeering angrily against CAA, NPR and NRC and whatever they were taught by their elders.

At the same time, on Twitter I found a video of a girl under 10yrs, reciting a poem “Goli maro gadaron ko” (I don’t know who has written that) on a school function I guess while her teacher was standing beside her. And then in a video a journalist was asking few children (std 1 to 3) why didn’t they go for school that day to which they answered teacher told them to be at Shaheen Bagh as “Modi kutta hai and musalmano ko bhaga dega, but hum nahi jayenge”. On asking who told them so, they replied aajtak. And thank God the journalist convinces them saying nothing wound happen to them that way and they should go to school to which the children happily complied.

Recently on face book too I saw an under 10 Kashmiri girl reciting a poem “Hindustani ne ek kutta pala, jiska naam Modi hai” something like that. I think everyone whoever in any social media must have encountered such unpleasant stuffs.
My point is, is it necessary to make children part of such distasteful things. In Indian way of life across any religion or belief, more precisely in our social life we don’t even allow our children to be a part of any family disputes…let alone any public scuffles. Moreover even parents don’t fight before children and they are often advised to do so by the elders of the family as a measure to keep young and tender minds of the children which may have a serious impact. Movies which have violence above a point are not given U/A certificates…so that children shouldn’t even watch those movies. Then how can we feed our children with political, religious or community hatred and make them involved in it? Isn’t it an evidence of our sick minds?

Second, how is it justified taking them to public places or public protests like Shaheen Bagh? Often such public protests are potentially dangerous situations. Highly unpredictable in nature. There is no control over how the other people will act or react. Chances are that a peaceful protest may tits up and end up in violence. So isn’t taking children to such places is endangering their lives?  Isn’t it a violation of their human right to live? Unfortunately the death of a four month old infant at Shaheen bagh, Delhi was reported due to extreme cold and what’s more sad was parents leveled it “shaheed”. Really!! Since when it became a definition of “Bravery” to take children and pushed them to the death well?

They don’t even know what the heck is done with them by their so called custodians, parents. And how can parents who should ideally protect them, their childhood, and their innocence, put them in such life threatening situations? Isn’t a part of parenting about minimizing risks and protecting children from any violence or danger?

From feeding hatred to putting their lives in danger, using them as a tool to get attention and sympathy is what has become a practice now a day’s across all political, religious and any group for that matter.

But I have a serious reservation when children are used in such stuffs. I wish and hope that there will be a complete BAN on it by the concern authority. We must think repeatedly Should Children be Part Of Any Political Protest?

Children at this point of time are already loaded with challenges like nutrition, hunger, right to education, trafficking, begging, child labor etc. Isn’t it a sin to load them with our agenda of hatred and odium?
I appeal everyone to protest against such things which are happening in and around us. Whenever I notice such things on social media, I report it immediately. Similarly I make it a point to speak against it, right away.

Let’s SPARE children and let’s SAVE their childhood. Neither in private or public places feed them with our hatred, beliefs what-so-ever and messed up their tender minds and innocent hearts