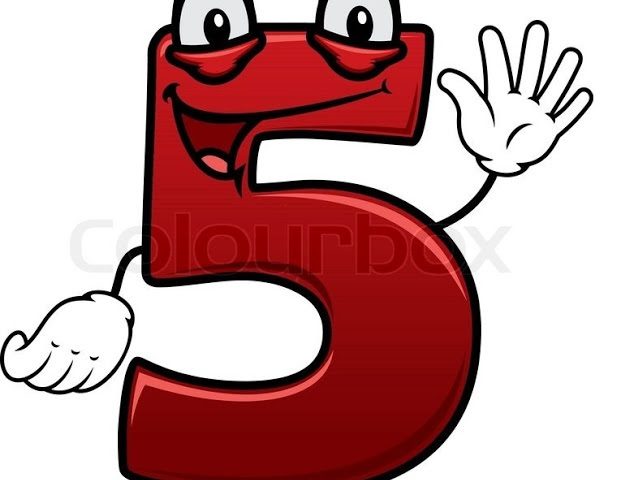 FYI….For Your Information, I am not a numerologist. However I have I am fascinated by scores of things involving different aspects of life. Today is the SIXTH Day of this #AToZBlogchatter Challenge and the Alphabet of the day is F.

When I thought of F, of many things that came to my mind, the first that struck me was FIVE – The Number.

There are so many things about the significance of the number 5. However here I am writing precisely about few of them.

Here are my observations on number 5

In Hinduism more precisely Hindu Culture, the Number Five has a great significance. There are names of the lord and religious rituals attached with it. Let me write some of them here

Lord Shiva is believed to be a five faced god hence he is revered as PACHANAN. Panchmukhi Shiva is an image of the idol of Lord Shiva with FIVE faces.

FIVE is the sacred number of Lord Shiva so five mantras (verses) and five syllables represent him signifying his five heads that demonstrate five aspects of his divine persona.

The goddess Saraswati, goddess of knowledge and intellectual is associated with number 5. Her day of worship is termed as PANCHAMI or Sree Panchami – The FIFTH day of the month of ‘Magha’.

PANCHAMRITA – The literary meaning of Panchamrita is FIVE AMRITAS (NECTAR) in Sanskrit. It is a mixture of five things used in Hindu worship and puja as sacred offering to the Gods. These are Honey, jaggery, milk, yogurt and ghee.

PANCHA MAHABHUTA – Five Great Elements – Pancha Bhuta or Pancha Maha-Bhuta in Sanskrit, are five great elements, also five physical elements, is a group of five basic elements, which, according to Hinduism, is the basis of all cosmic creation. The five elements are fire, water, air, earth, and ether. These elements have different characteristics and these also account for different faculties of human experience. In ayurveda and Indian philosophy, the human body is considered to be made of these five elements.

PANCHUKA – This is related to Odisha and The Culture of Lor Jagannath.  PANCHUKA is the last five days of Kartik month in Odisha and people abstain from all types of non-vegetarian food during the period.   Traditionally, staunch devotees of Lord Jagannath abstain from all type of non-vegetarian foods during the entire Kartik month which is regarded as Holiest Month of the months but those who are unable to follow it, observe it during the Last five days of the month. The five-day period is also of great connotation in Puri Jagannath Temple. Thousands of people who are observing Kartik Brata for the entire month gets an opportunity to have darshan of Lord Jagannath in FIVE different veshas or attire during the period. In PANCHUKA it is also believed that even the CRANE BIRD doesn’t eat fosf. That’s why it is also called as BAKA PANCHUKA

FIVE PHASES – In Hinduism Manifestations of the Deity are expressed in five phases:

These five phases form a schema of the Tree of Life

Apart from that…..
The most sacred tree in Hinduism has 5 leaves in every leaf stunt.
Most of the flowers have 5 petals in them.
The epic Mahabharata revolves around the battle between Duryodhana and his 99 other brothers and the 5 pandava princes –Yudhistira, Bhima, Arjuna, Nakula and Sahadeba

Five i.e. Number 5 is an angelic number, it’s the number of the harmony, balance and the divine grace. According to the Bible, it is the symbol of the Man-God by the Five wounds of the Christ on cross. For this reason, it is also considered as the number of the grace. There are five great mysteries: Father, Son, Spirit, Creation and Redemption.

The number five holds great significance in nearly all Buddhist traditions. It refers to the Five Colours, the Five Senses, the Five Wisdom, the Five Buddha, and a host of other important philosophies. The number five is intimately associated with the Chinese theory of the Five Elements, a concept underpinning the Zodiac Calendar, the latter serving as the preeminent calendar of old-world Asia.

PANJ KAKARS  – Five Ks – The five sacred Sikh symbols prescribed by Guru Gobind Singh are commonly known as PANJ KAKARS  or the “Five Ks” because they start with letter K.

Also, there are five deadly evils:

Apart from Religious and Cultural aspect here is few more significance of Number FIVE
The number 5 is signifies in the biology of Human as man has Five fingers in each hand, five senses and five toes in each foot.
Geographically there are PANCH Maha sagars, Five Oceans on the Earth.
Five fingers make a fist. Five people make a PANCHAYAT.
The Olympic Games have five interlocked rings as their symbol, representing the number of inhabited continents represented by the Olympians (Europe, Asia, Africa, Australia and Oceania and the Americas.

Five is also the only prime that is the sum of two consecutive primes, namely 2 and 3 in Mathematics.

And The List goes on…. There are many more unique things and observation about Number FIVE.The number 5 is the most dynamic and energetic of all the single-digit numbers. It is unpredictable, always in motion and constantly in need of change. It’s a number of positivism, resonates with the influences and attributes of personal freedom and progress.

This is also published my other Blog CLICK HERE

I must state here that this article is a researched one and some information apart from what I already knew have been added  from random sources of reading on internet like, Google and Wikipedia.