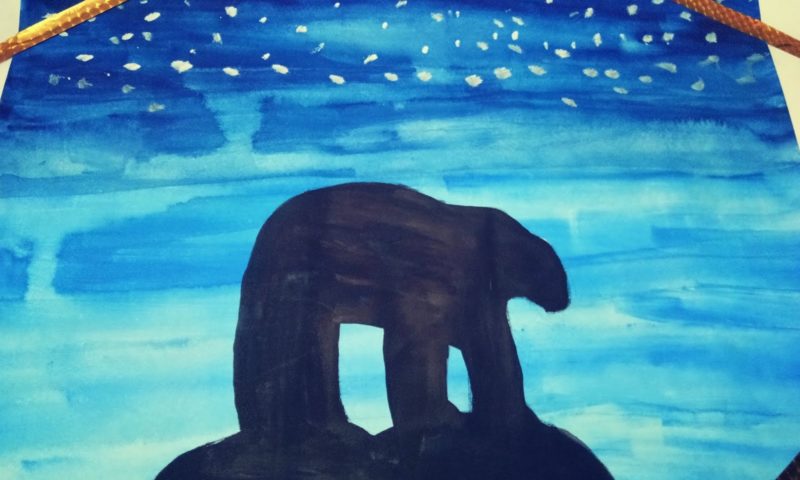 I For IMAGINATION HAS NO BOUNDARY!!

IMAGINATION HAS NO BOUNDARY

However before you start reading the post, I insist, just has another glance on the above image. It’s a painting.  What do you see in the above picture/painting?  What message the painter might have thought to give through this painting?

Well, you might have your own denotations according to your own decoding/understanding system. Even I had that. In fact, I was wondering, “why the silhouette of a polar bear has a blue sky with dark blue clouds dotted with white stars as a backdrop? A polar bear generally reflects the polar reason that is mostly white. Isn’t it? Then…??

My Son was in 7th STD. There was a drawing and painting competition in his class. All the students had painted wonderful pictures. My son – not an artist for sure but loves paintings and drawings – had collected a few – 5 to 6 –  of them from his friends and brought home and put them on the wall with the help of his dad.

Once they are all on the wall, he asked me which one was good and what message do I read from the above paintings.  With an intent look I tried to judge the paintings. One of them was a sunrise which appealed me most.  So I declared it as best. However my attention was caught by this particular painting which appeared bit peculiar to me. I asked him “Pupun, what’s this painting is about? I didn’t get it”

Quickly he said,” Mamma, here, my friend Manav has been represented as a  polar bear, sad and done, as we have left him in the polar reason. Do you know why? Bahut Masti Karta hai na” and he giggled.

Instantly it brought a smile on my face. I knew how these just-into-teens children do these days to tease their friends. They have a different world altogether, happy and carefree. Isn’t it?

Well, after we had a good laugh session, he stopped and told me “Ohkay, Mazak Kar Raha tha Mamma, now let me tell you what it is?”

I looked at him wearing a question mark on my face.

“It’s the Effect of GLOBAL WARMING in another few years from now, Mamma.” He said as if he is my teacher and I am a naïve student before him. “Can’t you see the polar bear is sad as no one of his friends is alive? They are all dead as all the ice in polar reason has been melted? Only a few flurries of snow like structure remained in the air.”

You know, there will be no more ice in glacier reason in a few years from now if the global warming will keep increasing this rate as of now. Isn’t it? How can a polar bear survive without glacial surfaces? Won’t it get the threat of extinct of its species? That’s why it is sad….did you get it?”

Trust me he appeared to be a little cherubic professor to me….

I looked at him, jaw dropped, amazed. Seriously, the imagination of these kids can really dig a well in the sky too. However, now I felt this painting is best though I am yet to meet the artist… Imagination Has No Boundary, Indeed!!

What do you say!!

This post is also published in my other blog