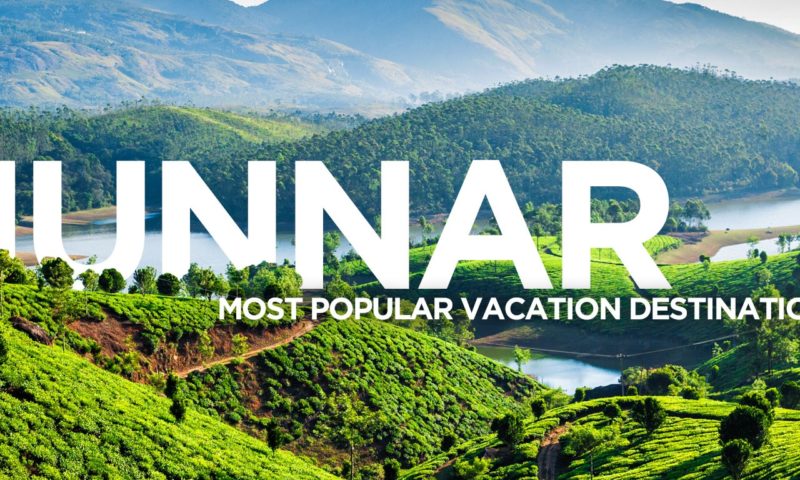 In continuation of my travelogue, like I’ve mentioned, I spent my childhood in the vicinity of nature in a small town called Kotdwar in the foothills of Himalayas in the state of Uttrakhand. After completing my studies, I moved to Gujarat for my job.

Over a period, when our children were growing up, my son was working in Hyderabad and my daughter was staying in a hostel for higher studies. So, my wife and I had plenty of time available to explore nature, being nature lovers. So, we planned to visit the majestic Kerala and the beautiful town of Munnar also known as Kashmir of south India. Munnar is a town in the Western Ghats also known as Sahyadri mountain range that covers a stretch of 1,600 Kms parallel to the western coast of the Indian peninsula, traversing the states of Kerala, Tamilnadu, Karnataka, Goa, Maharashtra & Gujarat. Munnar is a hill station and former resort for the British Raj elite. It’s surrounded by rolling hills dotted with tea plantations established in the late 19th century.

My wife and I started our journey from Mumbai airport to Cochin airport, which is about a two-hour journey.

One important thing I want to mention here about Cochin airport is that it now boasts of the first solar powered airport of the world and won the coveted CHAMPION OF THE EARTH AWARD in 2018.

We reached Cochin in the evening and planned to start for Munnar the next morning. Cochin is the most densely populated city of Kerala and an important spice-trading center on the west coast of India from the 14th century onward and has maintained a trade network with the outside world. In the evening, we visited the Naval airport area of Cochin and enjoyed a boat ride. It was a peaceful experience.

Next morning, the designated driver reported at our hotel and informed me about his arrival, who was sent by the travel agency. I told him that we would be ready within 15 minutes as we were about to finish our breakfast. We reached at the reception and were greeted by a gentle-looking person in his forties with a smile on his face. He was ready with the car to take us to Munnar (125 kms from that place). His name was Chandan. Normally, I like to interact with people that I travel with. I believe there are many advantages to it. We often get a lot of additional information about the place and traditions, which are completely new and add value to our knowledge and travel experience. 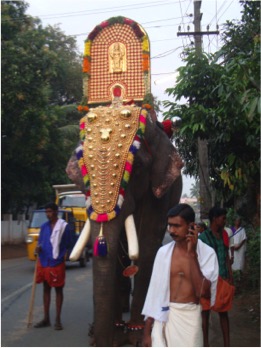 The journey started well enough. In the beginning itself Chandan said that sir, we should start our journey after taking blessings of the lord Maha Vishnu, so first I am taking you to the Sree Poornathrayessa temple. The temple is considered among the greatest temples in Kerala and was first among 8 royal temples of erstwhile Kochi Kingdom. We happily agreed.

He said that Lord Poornathrayeesa is believed to be a big fan of elephants and he was well known for his elephant love. Every year in the month of November & December, an annual festival is held here, and more than 40 elephants participate in his grant Vrishchikotsavam. And the owners of the elephants send them without expecting anything in return as their lord is elephant lover.

Soon after we proceeded for Munnar. The road leading to Munnar was very beautiful and full of nature. After one hour of journey I told him that we would halt for lunch at some vegetarian restaurant.

He stopped at a nice restaurant on the roadside; we were mesmerized by the aura of the beautifully maintained restaurant having many huts for families. Really it was such a beautiful site as he has taken us to a small hut and made all arrangement for our comfortable seating. The quality of food was very nice and as per our satisfaction level.

Further after covering around 80 kms from Kochi, Chandan again said that we would like to visit the spice garden. There were a lot on the roadside itself as Kerala is famous for spices. We had not visited any spice garden before, so he took us to a famous Deepa world spice & Ayurvedic garden with huge varieties of spices, Cardamom, Vannilla, Pepper, Cinnamon, Coffee, Tea, Clove, Nutmeg, Bettle Nut, Cadbury, Allspices (Sarvasuganthi), Lemon Grass, Curry Leaf, Ginger, Garlic, Hibiscus, Pappaya, Mosambi, Orange, Mango, variety of Jackfruits, water cherry, various type of Guava Trees, Coconut Trees, along with a variety of flowers was available. There were employees who briefed us about the production & uses of every spice grown there.

The owner was very friendly and had profound knowledge about spices. He also had a house & shop to sell his spices and other products, which are grown there at a very reasonable price. A must visit to the spice garden. He charged only rupees 100 per person for the complete farm visit. It was an amazing experience and we acquired lot of knowledge. 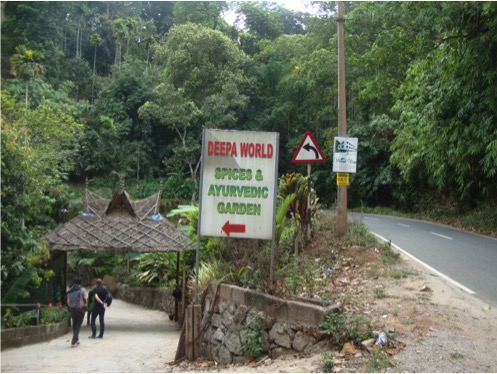 We were really amazed by the knowledge and humbleness of Chandan during our first day journey. In the evening we reached Munnar town and settled there in a resort. We had great fun in the evening, incidentally the resort owner’s residence was in the backside of our room and his garden was clearly visible from our first-floor room. We were just relaxing on the couch in the balcony, suddenly my wife exclaimed, look! What a cute pair of cats is playing in their garden.” Indeed …… they were very cute, so she insisted we go down there to the garden, as she loves animals to the extent of madness. I was a bit hesitant initially but later we went there and met the owner and asked if we could play with their pets. 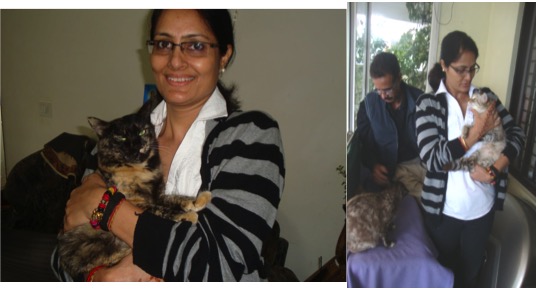 The next morning our plan was to visit in and around Munnar city, there are many places to visit in the periphery of the town.As per the advice given by Chandan, we first visited, Kannan Devan Tea Estate also known as The Tata Tea Museum, a Tata-owned tea estate in Munnar, which was located at 2 kms from the center .The Tata Tea Museum is located in the middle of a beautiful tea garden and is a one-of-its-kind museum of India.

Tourists visiting here get to know about the establishment and progress of the tea plantation industry in India. Right from the manually operated tea roller to the fully automated tea factory, you get to know about every single fact related to the Munnar’s tea plantation’s automation. Tourists were assembled there at the entry point to see the whole process of making tea as the employee of the plant were taking one group at one time to showcase the methodology of differential stages of tea processing.

We never knew this whole process before and gained insights about the processing of tea leaves and the marketing of the finished product.

The museum also displays the old-fashioned bungalow furniture, magneto phone, wooden bathtub, cash safe, iron ovens and other modern and other exhibits. Finally, they have a demonstration room in which you will get to taste various types and flavors of tea. There’s a nominal charge of 100 INR per head to taste the plethora of tea flavors of Munnar.

At one side of the main gate there was a shop for sale of different type of tea products at factory rate. In that shop, we met a beautiful tourist couple from New Zealand, who were incidentally staying in our resort itself and we talked with them about the culture and rich heritage of India with a nice cup of coffee. They were mesmerized with the rich cultural heritage & diversity of India.

In the afternoon we visited the local Munnar Floriculture Centre, also known as Munnar Rose Garden. It is one of the top places to visit in Munnar. Floriculture Centre is home to hundreds of rare varieties of flowers and other plants including cacti, herbs, shrubs and creepers. Operated by the Kerala Forest Development Centre, it is spread across acres of land in the city of Munnar.

We visited one more garden in the evening and enjoyed the variety of Masala dosa in a small restaurant in the main market. The final day we enjoyed the famous Kathakali dance at the city auditorium and spent our time and money shopping in the local market.

We stayed there for three days and had great fun and started our return journey to Cochin next morning. We visited famous temple of Lord Shankaracharya lightly 8km off from the main route. Divine feeling.

In the evening, we reached Cochin but came to know that there was a “band call” given by the trade unions in Kerala and it would be completely closed off the next day. As our hotel was in the main town nearly 20 kms from Airport and in the absence of any transport next morning it would be difficult for us to catch the next morning flight to Mumbai. 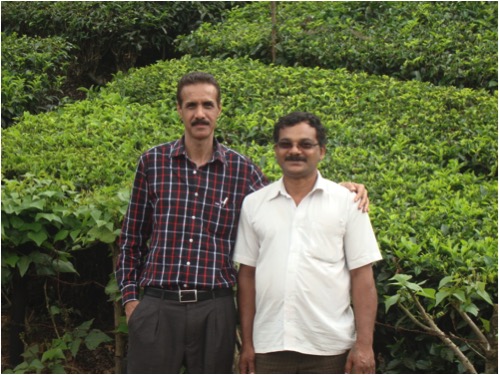 We were in a pickle and we wondered what to do!

Once again Chandan suggested, “Sir, I can take you to some Hotel near the airport, so that you can walk down to the airport next morning. You cancel your hotel booking in town.” Right, there were no other options available for us other than that. He took us to different hotels in the vicinity of the airport, but they were all full, as many tourists had already occupied the rooms in the light of band call. He took us to 4-5 places then finally we got an accommodation in one hotel with his undying efforts when we had almost given up.

It was then time to say a sad goodbye to Chandan and as gratitude, I wanted to give him a nice tip for the top-notch hospitality, care and support but he politely refused.Finally, my wife told him to take this as a token of love for his daughter from us and then only he agreed.

Living a fast-paced life, we all tend to forget to stop and stare at nature’s wonders that not only include mountains and valleys, but also our fellow human beings. It is equally important to take care of humans just as we should preserve our surroundings. After all, they also are a part of it and play a huge role in the ecosystem. It’s easy and sometimes inevitable to become numb to all that, when we become too engrossed in our personal gains.

Getting to know Chandan a little taught me just how much I also fell in that category and just how much I had missed out on gaining emotionally. It was refreshing to interact with him and realize the joy of caring for others rather than only yourself.

I have never come across such a nice human being in my entire life despite being a frequent traveler. And I often wonder how life molds people into different personalities each unique to its own.

While taking off…I realized that Travelling is not just about Places but about PEOPLE too…. 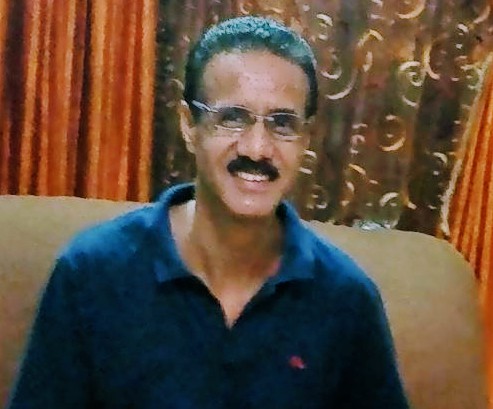 This story has been written by Mr.Rakesh Nautiyal, a Senior Scientist, GM at ONGC. Recently I came across him and become friends. There are many interesting stories he would tell at times…being a globetrotter. This is his travel story to Munnar The Kashmir Of South, Kerala. Connect with him at twitter.

T For Trip to the Badrinath Shrine, Uttrakhand!!

Trip to the Badrinath Shrine, Uttrakhand!! In continuation of my travel dairy,K For Kanvashram in…